It looks as though anti-gay, 'traditional marriage' defending, Republican former South Carolina Governor Mark Sanford, who left office over and extramarital affair and is now running in a special election for the state's 1st Congressional District seat, may be toast again. 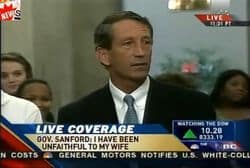 Documents acquired by The Associated Press Tuesday say Jenny Sanford confronted her ex-husband leaving her South Carolina home on Feb. 3. Her attorney filed a complaint the next day and she confirms the documents are authentic.

In them, she says he was using his cellphone as a flashlight as he left. The couple's divorce settlement says neither may enter the other's home without permission.

Sanford has been ordered to appear in court two days after his election.