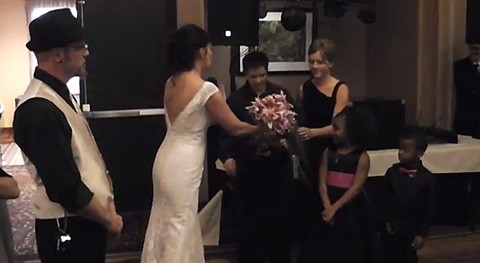 Natasha Frost and Tony Friesen were married this week in Minnesota, but instead of engaging in the traditional bouquet toss, Frost decided to make a statement and give the bouquet to her sister Nitara in hopes that she could marry, asking the guests at the wedding to take action supporting marriage equality, HRC reports.

“I wanted to give them the bouquet in the hopes that Minnesota lawmakers will actually recognizes the right for everyone to marry in Minnesota and we’re hoping that happens this year so we can celebrate the final sister’s wedding.”

Watch the guests cheer as Frost hands off the bouquet, AFTER THE JUMP…