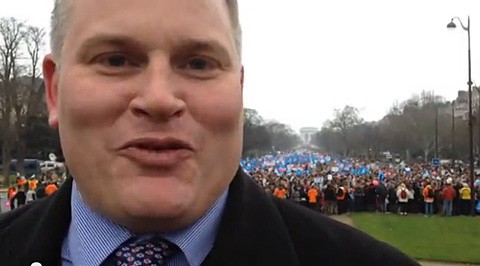 NOM President Brian Brown, who celebrated with anti-gay forces in France in January, condemned the violence taking place there and revealed that an international anti-gay marriage group has been formed, in a post last night:

"It appears that France's socialist government is on the verge of succeeding in their ill-conceived quest to redefine marriage, despite massive grassroots opposition from the citizenry. We urge all French citizens to contact lawmakers to express their strong opposition to this policy. We also call on all citizens to conduct themselves honorably and peacefully. Even though the same-sex marriage policy being foisted on an unwilling public is profoundly unwise and anti-family, no citizen should ever express their disapproval through violent means. We condemn in the strongest possible terms violence by anyone on either side of this debate.

If the government of France does succeed with this vote to redefine marriage, it will not be the end of the debate. It will be time to hold the government accountable and to act to restore marriage to its rightful place as a good and honorable institution that brings husbands and wives together to provide children with both a mother and a father. NOM will continue to work with our friends in France to defend marriage as our most important social institution.

Specifically, NOM is working with the Collectif Famille Mariage (CFM), a charter member of the International Organization for Marriage (IOM). CFM—along with a wide coalition of pro-marriage organizations—is imploring France's Constitutional Council to carefully study and limit the scope of this law, which has been rushed through the Senate and the National Assembly.”

Jeremy Hooper pointed out that an international group appeared to be in the offing earlier this month.