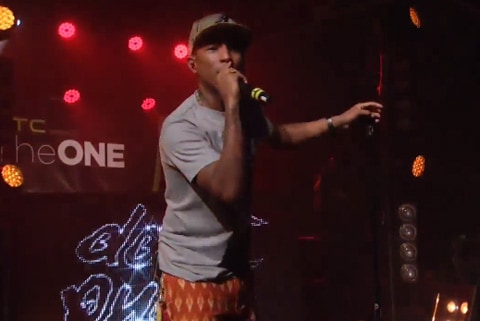 Pharrell did his first live performance of Daft Punk's new track "Get Lucky" at an HTC Live event in NYC on Friday night.

Meanwhile, "Get Lucky" is breaking records on Spotify:

The music service says the French electronic duo's song "Get Lucky" had the biggest streaming day for a single track on Friday in the U.S. and the United Kingdom. Spotify wouldn't release the number of streams.

Macklemore & Ryan Lewis' "Thrift Shop" previously held the record for most streams in a day in the U.S. British band Bastille had the title in the United Kingdom with the song "Pompeii."