Michigan RNC Committeman Dave Agema, who has so far refused to resign for hateful remarks about gays on his Facebook page despite being asked to by Republican leadership, had a talk with hate group leader Tony Perkins, Right Wing Watch reports. 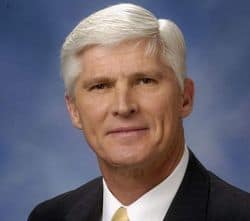 Agema compared homosexuality to alcoholism and drug abuse and then unleashed this zinger:

I think what the people have to know is if this passes, what will happen is it is just a progression of events that will occur. First of all, what will happen to your school kids when they are in school, it’s already being taught in a lot of places that it is an accepted lifestyle. Then the next thing that will occur is your kids will come home and say I think this is a good thing and I think I want to be one, and if you as a parent stand up and say this is against my moral beliefs and my biblical beliefs, then the next thing you’re going to get into is hate crimes because you’re speaking against something that’s been sanctioned by the state. If you look at Denmark and others then the state also tells the churches you have to marry homosexuals and if you don’t what may happen in the United States is you might lose your tax exempt status.

So this all blew up and so I made a web page here listing several other studies that show the harmful effects of the homosexual lifestyle. Just imagine this, if our kids are in school instead of being told that this is an acceptable and OK lifestyle we are actually briefed and taught the ramifications of this lifestyle, that you’re going to live twenty years less than the average person, you are going to die younger and here’s all the diseases you’re going to contract, there’d be a totally different philosophy here instead of basically telling the kids that this is good. So I think we got to go into this with our eyes wide open and what the 2 or 3 percent of homosexuals what they are doing in the United States today is trying to get the courts to do what they can’t get the individual states to do, and that’s dictate that all states will accept homosexual marriage.