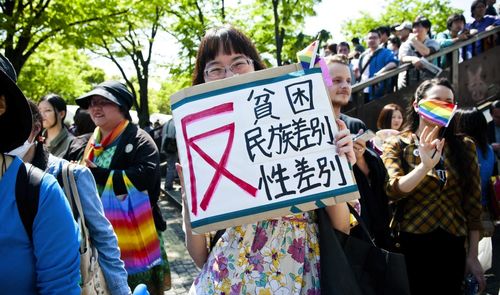 Yesterday, about 12,000 people took to the streets of Tokyo to march in in Japan's very first Rainbow Week.

"This is our first attempt to link up with many groups" of sexual minorities, said one of the organisers, Hiroko Masuhara, 35. "The parade is a symbolic event in the (Tokyo) Rainbow Week programme."Masuhara, who held a wedding with her partner at Tokyo Disney Resort last month, said support for gay rights was rising in Japan."We have an impression that we are seeing more women and various nationalities of people participating in our parade in recent years," she said.

Masuhara and her partner became the first gay couple to be married at Tokyo's Disneyland.

Rainbow Week ends May 6. Watch a video of the parade, AFTER THE JUMP.