Larry Tolliver, the police chief of Anne Arundel County, has been accused of making homophobic slurs against an officer who testified in a corruption trial against former County Executive John Leopold. Tolliver allegedly called the officer a "fag" and a "rump ranger" and reassigned him and two others as retribution for their testimony. 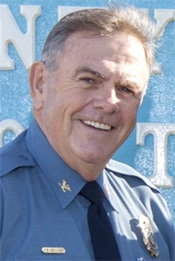 Tolliver is denying the charges, the Capital Gazette reports:

He said allegations he reassigned officers who had testified against former County Executive John R. Leopold are false. Tolliver did, however, admit to using off-color language about homosexuals, though he said he didn’t recall using it at the workplace. The allegations surfaced in a letter dated Monday from County Councilman Jamie Benoit, D-Crownsville, to County Executive Laura Neuman.

Benoit alleged Tolliver reassigned three officers from the department’s Intelligence Division to the Southern and Western Districts and relieved the major who oversaw the unit as “retribution against the very officers that led to the removal of the most corrupt elected official in our county’s history.”

Another officer left the unit voluntarily before he could be reassigned, Benoit wrote.

Benoit said one of the officers, a 20-year-veteran of the police department, filed a complaint against the police chief for making anti-gay slurs.

Benoit wrote that in the complaint against Tolliver, the police chief is alleged to have told the officer, “I didn’t know you that you were a fag” after looking at a picture of him.

Tolliver also reportedly called the officer a "rump ranger", according to WJZ.

Chief Tolliver refused to answer questions on camera but said in a statement, “I in no way, shape or form am homophobic. I don’t encourage any negative attitudes or feelings towards homosexuality and don’t question anyone about their sexuality…I fully support a culture of diversity in the agency and it is something I have worked very hard towards, specifically in our recruiting efforts.”

Watch a report from WJZ Baltimore, AFTER THE JUMP…