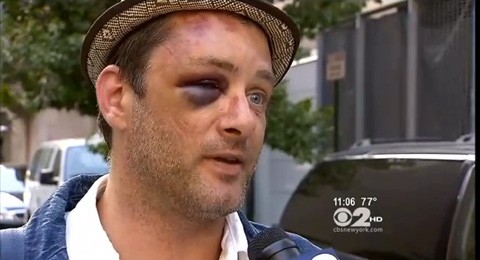 ABC7 last night took a look at anti-gay hate crimes in NYC after two more, one against a nightlife promoter in NYC's East Village and one against a couple in Soho, were reported.

CBS2 spoke with that nightlife promoter, Dan Contarino, about the attack that sent him to the hospital.

Watch both reports, AFTER THE JUMP…

Contarino's attacker, has been arrested. ABC7 has more:

In one incident, the victim, 45 year old Dan Contarino, and the suspect both live at a nearby homeless shelter, on Avenue D. They left the shelter to have drinks and then went to get pizza.

Police said the victim said at some point they had a conversation about homosexually. The suspect became enranged, yelled anti gay remarks and struck the victim several times in the face. Contarino went unconscious and woke up at Bellevue Medical Center.

The suspect, 39-year-old Gornell Roman turned himself in to a police precinct in the Bronx late Tuesday night. Roman is charged with felony assault, felony aggravated harassment and misdemeanor assault, all as hate crimes. Roman has more than two dozen prior arrests, many drug-related charges. Roman is charged with assaulting 45 year old Dan Contarino after they went out for drinks and pizza in the East Village Monday night.

They started up a conversation about homosexuality while walking back to a homeless shelter where they both were staying. Roman assaulted Contarino on the way back to the shelter, yelling anti gay remarks and striking the victim several times in the face. Contarino went unconscious and woke up at Bellevue Medical Center, where he was treated.

Watch both reports, AFTER THE JUMP… 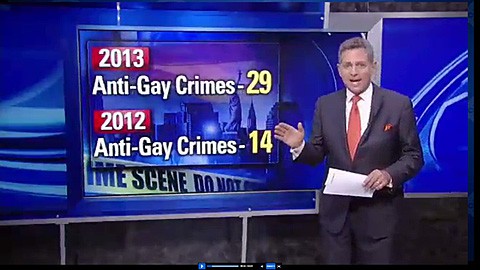