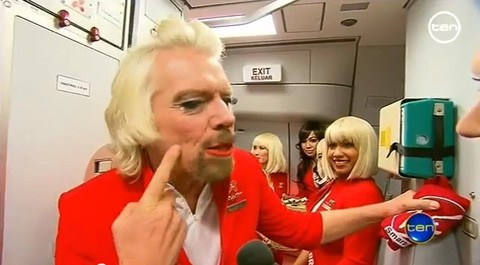 Passengers aboard an AirAsia flight from Perth to Kuala Lumpur were treated to the sight of Virgin mogul Richard Branson in drag. Branson lost a Formula One racing bet with AirAsia chief Tony Fernandes in 2010 and paid it off by serving as a flight attendant.

Branson dumped a tray of orange juice deliberately on Fernandes' lap during the flight, the AP reports:

"I wanted to kill him actually" for spilling the juice, the Malaysian told reporters.

"He looked at me, I said, `don't you dare,' and the next thing I know, he tipped the whole tray on me," Fernandes added. "He and the girls mopped it up, but I was walking around the flight in my underwear for a while because I didn't bring another pair of trousers."

Watch Branson fulfill his duties, AFTER THE JUMP…