Calvin Klein and his boytoy Nick Gruber have reportedly patched things up, despite Gruber's threats to write a 'beyond shocking' tell-all about Klein and star in a reality show following their break-up. 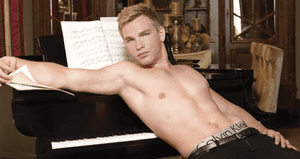 A source now tells us, “Calvin feels very protective over him. Despite all that has happened, and everything he’s done, he still loves Nick.” We’re told Klein flew Gruber to Mexico and the two met up at an exclusive resort there. The source added, “Calvin wants to keep it low-key.”

Another source said, “Nick and Calvin had been texting and met up at the Chateau Marmont [in Los Angeles] about a month ago. Nick and John broke up around February, but remained friends. John actually encouraged Nick to get back with Calvin. He thinks it would be helpful for him.”

A spokesperson for Klein said: “I can confirm they are friends and no more. There is no relationship whatsoever, but at the same time Calvin holds no grudges and has put whatever problems they had behind him.”