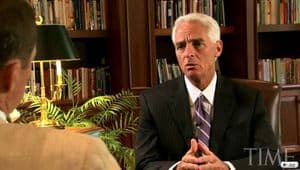 Some great news: On Tuesday, Delaware became the 11th state to allow marriage equality. And just a few days ago, Rhode Island adopted a similar measure, which followed victories last fall in Maine, Maryland and Washington. I most certainly support marriage equality in Florida and look forward to the day it happens here.

Crist is potentially planning a run for governor of Florida as a Democrat.

In December, Crist said he regretted signing a petition in 2006 for a constitutional amendment banning same-sex marriage in Florida.

Seems to us he still has some explaining to do about his position. Was it an evolution or an acknowledgement that he felt the need to discard his true feelings in '06 to avoid antagonizing social conservatives? Crist back then called himself a "live and let live" Republican and at one point suggested he backed civil unions (back then that position still carried some political risk) in an interview with Jim Defede.

And yet he signed the petition for the gay marriage ban initiative, and sent campaiign mailers touting his support for "traditional marriage." He will address Democrats in Hillsborough County Saturday night. Can he avoid talking about this?

And nobody's forgotten about this and this.