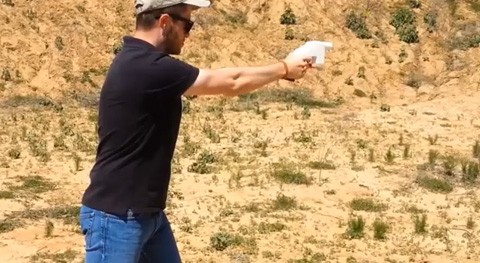 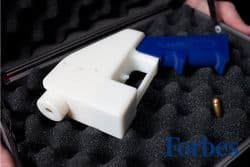 Wilson yesterday released a video of the gun being fired.

Forbes adds that Wilson's project has made him one of the most controversial figures in the 3-D printing community:

Once the file is online, anyone will be able to download and print the gun in the privacy of their garage, legally or not, with no serial number, background check, or other regulatory hurdles. “You can print a lethal device,” Wilson told me last summer. “It’s kind of scary, but that’s what we’re aiming to show.”

Since it was founded last August, Wilson’s group has sought to make as many components of a gun as possible into printable blueprints and to host those controversial files online, thwarting gun laws and blurring the lines between the regulation of firearms and information censorship. So far those pieces have included high capacity ammunition magazines for AR-15s and AK-47s, as well as an AR lower receiver, the body of that semi-automatic rifle to which off-the-shelf components like a stock and barrel can be attached.