A gay teen has been arrested and jailed for organizing an LGBT rights march in central China, the AP reports:

The man, identified only by his surname Xiang, was detained following the Friday event in the city of Changsha and ordered to serve 12 days in a detention center for organizing an illegal march, according to a notice on the local police's microblog account.

Changsha newspaper Xiaoxiang Morning News quoted Xiang as saying before the march that he hoped it would make people question discrimination against gays, lesbians, bisexuals and transgender people, and "let more people have a correct understanding of us."

Approximately 80 people took part in the march, which was held on May 17, the International Day Against Homophobia.

Watch a news report about the organization of the march, AFTER THE JUMP…

Xiang has been transferred to the Changsha Municipal Detention Centre, said A Qiang, a fellow demonstrator and well-known activist from Guangzhou. Xiang has been active in the local LGBT community since age 14. A Qiang said Xiang had approached police about the protest before it took place on Friday afternoon…

…A Qiang said police did not interfere with the protest, except towards the end, when police approached the protesters, telling them not to shout slogans and impede traffic.

By 2.45am on Saturday, Xiang and three other people were taken away by police from a hotel room they were staying in. All except Xiang were released by the afternoon.

A Qiang said the protest was one of at least 10 across China on Friday. Demonstrations took place in Beijing, Shanghai, Guangzhou, Chengsu, and also in second-tier cities such as Nanchang.

He said he did not recall anyone else ever having been but briefly detained for organising such protests. 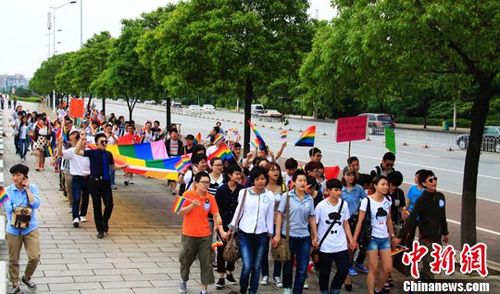