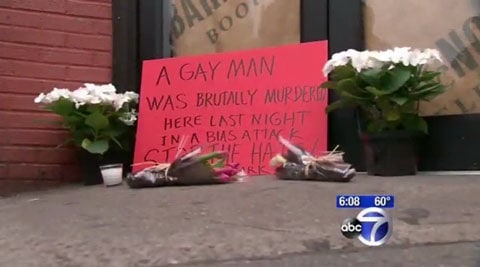 The killer of a gay man in NYC's Greenwich Village early Saturday has been charged, the WSJ reports:

Elliot Morales was charged with murder as a hate crime and weapons charges after he allegedly volleyed antigay slurs at Mark Carson before shooting him once, point blank, in the head, police said.

Mr. Morales, who has a criminal history that includes several stints of incarceration, was arraigned Sunday in Manhattan Criminal Court and remanded to prison. He wasn’t required to enter a plea. His court-appointed attorney couldn’t be reached for comment. Being charged with murder as hate crime means he could face a harsher sentence if convicted.

“It’s clear that the victim here was killed only because and just because he was thought to be gay,” New York Police Commissioner Raymond Kelly said during a news conference on Sunday. “There is no question about that. There were these derogatory remarks. The victim did nothing to antagonize or instigate the shooter in this case. It’s only done because the shooter believed him to be gay.”

Morales "laughed in hideous glee as he confessed," the NYDN reports.

As we noted yesterday, there is an anti-violence rally and march TONIGHT which begins at 5:30 pm at the Lesbian, Gay, Bisexual and Transgender Community Center (208 w. 13th Street), ending at the site of the murder on W. 8th street and Sixth Avenue.