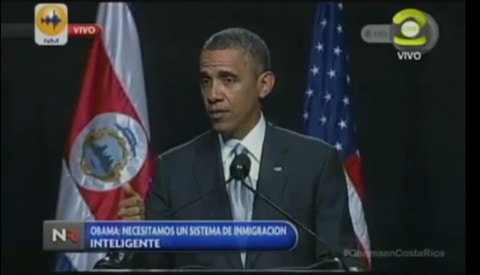 In a press conference which included a wide range of topics, President Obama told reporters in Costa Rica last night that he supports LGBT-inclusive immigration reform because it's "the right thing to do" but admitted he was uncertain about what might happen with the provision.

"The LGBT community should be treated like everybody else. That's the essential core principle behind our founding documents. The idea that we're all created equal and we're equal before the law…And so Senator Leahy may present this provision in committee, it may be presented on the floor. It will be one of many amendments and provisions, some of which I support. Some of which I think are really bad ideas…I can tell you I think that the provision is the right thing to do. I'll also tell you that I'm not going to get everything I want in this bill. Republicans are not going to get everything they want in this bill."