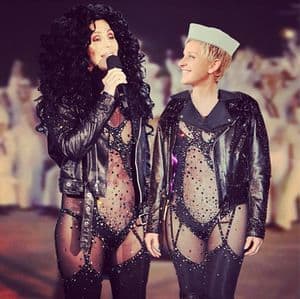 PHOTO OF THE DAY: That day that Cher and Ellen were twinsies!

NOM leader and all-around nut Brian Brown continues to bury his head in the sand and pretend that he is not fighting a losing battle. One Million Moms really need to find a hobby or something to fill their day other than getting upset about really stupid things. The latest call to action comes as a result of a commercial that implies that a man is shaving his body hair. What is this world coming to?! And YouTube sensation Antoine Dodson has given up on being gay and is looking for a wife.

In a behind the scenes look at Ryan Gosling's new film, Only God Forgives, we get treated to some sexual discussion between him and his director and a lot of bare Gosling bicep. Also a graphic music video from a gay Canadian director that depicts a bullied student being crucified is causing quite the stir in Canada and France.

Jason Collins' twin brother Jarron sat down with ESPN's Outside the Lines today and discussed not only his brother's coming out but also how anti-gay players should behave toward him. And the video of Reese Witherspoon's recent bizarre drunken arrest in Atlanta has been released and you're right Reese, it is totally "beyond".

Previous Post: « Oprah Sits Down with Jason Collins and His Family: VIDEOS
Next Post: Obama on Immigration Reform: ‘The LGBT Community Should Be Treated Like Everybody Else’ – VIDEO »