A South Carolina couple is suing the state after it made the unprecedented decision to perform irreversible and unnecessary sexual-reassignment surgery on a toddler in its care who was born intersex, WSFA reports: 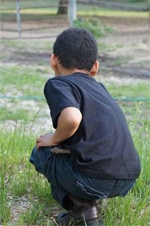 Mark and Pam Crawford, adoptive parents of the now 8-year-old child, spoke to the media Tuesday morning about the lawsuits filed in partnership with the Southern Poverty Law Center and other advocates in federal and state courts.

The Crawfords say the child was born with intersex condition, which means a person is born with a sexual anatomy that doesn't fit the definition of a typical man or woman.

The suit alleges the South Carolina Department of Social Services decided to perform "dangerous and mutilating surgery" in April, 2006. The decision to make the 16-month old a girl took away the child's right to choose his or her sexual identity later in life, the suit states.

Named in the suit are the Department of Social Services, The Medical University of South Carolina, Greenville Health System and several other caregivers.