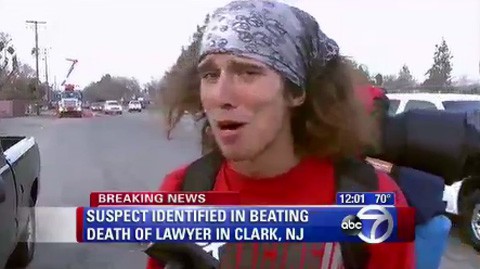 Caleb Lawrence McGillvary, a 34-year-old man who became internet famous after a video of his life-saving efforts against a man who thought he was Jesus Christ went viral on YouTube, is now wanted in the beating death of a NJ lawyer.

McGillvary is homeless but considers himself "homefree" and relies on the generosity of strangers for food, lodging and transportation.

Joseph Galfy, Jr., was found dead in his home Monday, two days after authorities said he met McGillvary in New York City. He was found wearing only his underwear and socks by police who went to his home to check on his well-being, the prosecutor said.

Statements posted on McGillvary's Facebook page following the homicide indicated the encounter was sexual in nature, Romankow said, though he declined to go into specific detail.

On his Facebook page, McGillvary's last post, dated Tuesday, asks "what would you do?" if you awoke in a stranger's house and found you'd been drugged and sexually assaulted. One commenter suggests hitting him with a hatchet — and McGillvary's final comment on the post says, "I like your idea."

After McGillvary's video went viral, he appeared on Jimmy Kimmel, and has since "traded on that celebrity to meet fans across the country," the AP adds.

UPDATE: McGillvary has been arrested at a Philly bus station.