Gawker meets $200,000 fundraising goal to obtain video of Toronto mayor Rob Ford smoking crack. "As we initially pledged, if we are unable to consummate a deal and obtain the video, we will donate 100% of the proceeds to a Canadian nonprofit that addresses the consequences of substance abuse. We haven't selected an institution yet. We will do so when and if the time comes."

Louisville church drops Boy Scouts troop in wake of organization's decision to include gay youth: "Southeast Christian Church Executive Pastor Tim Hester says the youth organization's consideration of that issue started a discussion that led to the church's board of elders to decide against renewing the church's charter with Troop 2012."

Joss Whedon tells Wesleyan grads: "You are all going to die".

Behind the Candelabra was "too gay" for the big screen. Soderbergh: "Nobody would make it. We went to everybody in town. We needed $5 million. Nobody would do it…They said it was too gay. Everybody. This was after Brokeback Mountain, by the way. Which is not as funny as this movie. I was stunned. It made no sense to any of us…[The people at HBO are] great and they're really good at what they do, and ultimately I think more people will see it, and that's all you care about. Studios were going, 'We don't know how to sell it.' They were scared."

Rob Lowe is, thankfully, back to his non-stretched face.

Glee's Samuel Larsen chops off his dreadlocks, takes off his shirt. 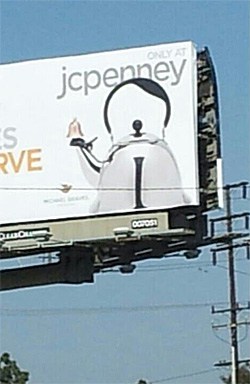 Hitler tea kettle on California JC Penney billboard turns heads. "The eerie tea kettle doppelgänger first made waves on Reddit this weekend, when a user posted an image of the billboard from the 405 Interstate near Culver City, Calif. The image soon spread all over the web."

North Carolina couple going to Hawaii for dolphin-assisted birth. “It is about reconnecting as humans with the dolphins so we can coexist in this world together and learn from one another."

Massive anti-gay march in Rio: "An estimated 100,000 evangelical Christians marched Saturday in Rio de Janeiro, Brazil to protest a ruling that effectively legalizes gay marriage in the nation. According to the AFP, the demonstrators ended their march at the Cinelandia square, where pastors spoke out against such unions and the faithful prayed. Gospel singers such as Marcelo Aguiar and Bruna Karla and the rap group Ao Cubo were among those who performed at the annual March for Jesus (Marcha para Jesus)."

John McCain loves war so much he can't stay away from it.

Union J boybander Jaymi Hensley talks about his coming out, in Attitude.

Maurice Williamson, the NZ lawmaker whose marriage equality speech went viral, tells other countries (ahem, Australia) to join them: "All gay marriage does is allow consenting gay couples to get married. That's it. I would say to the countries yet to have the gay marriage debate: Be Ye Not Afraid."

French anti-gay activist speaks out about protests: "The government is extremely surprised and annoyed by the breadth and the length, the duration of the movement. Francois Hollande had not anticipated that allowing same-sex marriage and adoption would create such a concern about so many people in France. He did this promise to satisfy a small lobby, particularly active lobby, who financed his presidential campaign. He didn’t anticipate that same-sex marriage was meaning in France adoption and plenary adoption – which immediately triggers the risk of losing the biological link between the kid and his parents. And in France this is very unique. And people are protesting against that to defend the right of children."