Nick Porto and his partner Kevin Atkins were attacked near Madison Square Garden on Sunday after they had enjoyed an afternoon brunch, DNA Info's Matthew Katz reports: 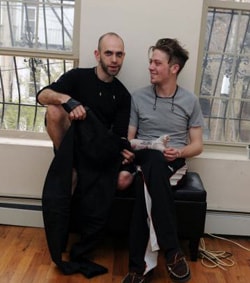 The pair were assaulted on Eighth Avenue, between West 34th and West 35th Street about 5 p.m., cops said — as the Indiana Pacers played the Knicks on Sunday.

Police said could not say whether the attack was a hate crime, as it was still under investigation, but Porto, who was left with a broken nose and severe headaches, said there was no doubt in his mind…

…Porto said that he and Atkins, 22, were walking arm-in-arm down Eighth Avenue after a leisurely brunch when a group of men he said were in their early-to-mid 20s and wearing Knicks jerseys started shouting slurs at the couple.

"They called us f—-ts," said Porto, a clothing designer. "They made fun of my jeans — I made the jeans myself, for that day."

When Porto turned around asked why they were shouting at him, the group of men knocked the pair to the ground and began to violently kick and punch them, he said.

Their attackers are unlikely to be identified, police say, as there were so many people in the area wearing Knicks jerseys. Atkins suffered a broken right wrist and lost his bag with iPad and cell phone in the attack.