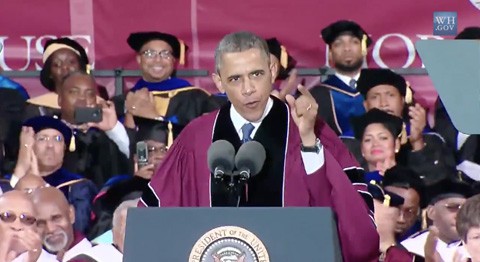 The crowd at the Morehouse College commencement ceremony over the weekend seemed momentarily stunned when Obama directed the gay men in the audience to be the best husband to their partners, but Obama held up one finger and stifled any dissent:

And that’s what I’m asking all of you to do:  Keep setting an example for what it means to be a man.  Be the best husband to your wife, or you’re your boyfriend, or your partner.  Be the best father you can be to your children.  Because nothing is more important.

Shortly thereafter, Obama told the all-male African-American institution's 2013 grads to have empathy with other minority populations like Hispanic and Muslim Americans, and gays:

So your experiences give you special insight that today’s leaders need.  If you tap into that experience, it should endow you with empathy — the understanding of what it’s like to walk in somebody else’s shoes, to see through their eyes, to know what it’s like when you're not born on 3rd base, thinking you hit a triple.  It should give you the ability to connect.  It should give you a sense of compassion and what it means to overcome barriers.