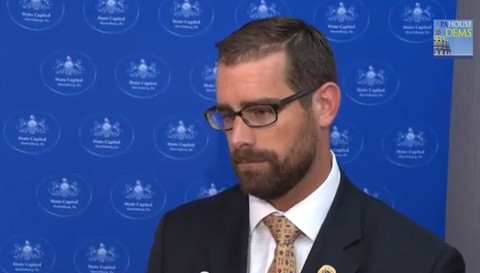 A group of 100 Pennsylvania lawmakers introduced two bills yesterday in Harrisburg that would offer sweeping protections to LGBT citizens across the state.

A broad group of state lawmakers today introduced bills HB 300/SB300, which would ban discrimination based on sexual orientation, gender identity or expression statewide in employment, housing, credit and public accommodations. And they cited a record high level of support for the measures.

"These identical proposals have a common goal — to end, once and for all, the last vestige of legal discrimination in Pennsylvania based on an individual's sexual orientation or gender identity or expression," said state Rep. Dan Frankel (D-Squirrel Hill), a co-sponsor of HB300 with Republican state Rep. Chris Ross, and sponsor of the bill in previous years.

Frankel noted that its the first time the bills have had such broad, bipartisan support, with 77 sponsors in the House and 25 in the Senate.

"On days like today — with the type of equality advocates, activists and warriors that I am joined by on stage — we show once again that the American spirit, the American dream and, most importantly, the American values demand that we as a commonwealth finally evolve."

Watch Sims speak about protecting the rights of all citizens, AFTER THE JUMP…