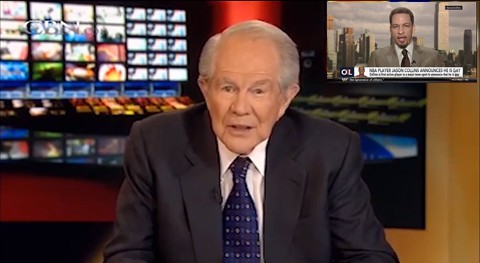 Pat Robertson yesterday defended ESPN commentator Chris Broussard, who caused a firestorm when he said Jason Collins was 'in rebellion God' for coming out as gay, Raw Story reports.

“Somehow we’ve said if it’s heterosexual fornication, it’s bad; if it’s homosexual fornication — that used to be called an abomination in the Bible — now it’s a protected civil right. And so somebody that says that that kind of conduct is sinful is now being pilloried in the press. He’s telling the truth! This is what the Bible says!…You can’t tell them if they want to go to hell or heaven, that’s their business. But don’t tell somebody that he can’t speak specifically about what the Christian faith says about certain conduct. There isn’t anything bigoted about that…So, our hat’s off to somebody who’s brave enough to say it. But, whew, let’s hope the people at ESPN will man up and defend their guy for speaking what is truth."

And so far, ESPN is standing by him.