The United States military has a rape problem, and it's nothing new.

Earlier this week, two women — Rebekah Havrilla and BriGette McCoy – appeared before a Senate subcommittee chaired by New York Senator Kirsten Gillibrand to recount their experiences of being raped and sexually harassed during their time in the military. They were joined by one man, Brian Lewis, who testified that he was raped by a senior officer in the Air Force while serving on the island of Guam. It was the first time a male victim appeared before Congress to discuss his sexual assault.

Their heartbreaking stories of abuse and command inaction are bad enough on their own; in the context of a military in which rape, sexual assault, and harassment are more common than morning coffee, they are downright enraging. According to the military's own report, the number of service members anonymously reporting a sexual assault jumped more than 30% in the past two years. In 2012, more than 26,000 troops reported experiencing "unwanted sexual contact," a significant jump from the 19,300 who reported such victimization in 2010. What's more, 10,700 of the 19,300 victims in 2010 were men. And that covers only those incidents reported to authorities; men are far less likely to report being victims of sexual assault, especially in a macho, testosterone-filled environment like the military. The real numbers are probably shockingly high.

P erhaps as high — if not higher — as they were in 1991, when 83 women and 7 men were assaulted during the Tailhook convention in Las Vegas in September 1991. Even that scandal, which was supposed to change the military forever, did not result in a single prosecution. The bankruptcy of the military justice system came back into the news recently when an Air Force general tossed out the conviction of an officer after the officer had been convicted of aggravated sexual assault of a woman.

This unique and dangerous facet of the military criminal justice system — the near boundless discretion given to the so-called "convening authority" to sign off on, reject, or modify the sentence of a general court-martial — is complicit in the growing epidemic of sexual crimes in the military today. But it is not alone.

Let's discuss the elements of military law that are contributing to this problem,
AFTER THE JUMP…

Male-on-male rape has as little to do with homosexuality as male-on-female rape has to do with heterosexuality. Rape is about power, domination, and the utter disrespect of the victim, whatever gender he or she might be. The epidemic of rape and sexual assault in the military is a product of several factors: an old boys network, unchecked masculine bravado, and a willfully blind leadership, just to name a few.

The supporting role played by current military criminal law is a more pressing, more easily rectified problem. And yet it is continually overlooked. 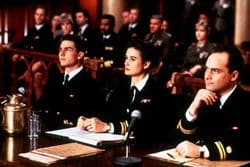 Military criminal justice looks a lot like civilian criminal justice. There are judges and juries (the latter are called "panels"); there are prosecutors and defense attorneys, the latter of whom are free and guaranteed to all criminal defendants. There are rules of evidence and a strong exclusionary rule, which prevents the admission of evidence gleaned from unlawful searches. (For a surprisingly accurate depiction of a military trial, re-watch or re-read Aaron Sorkin's A Few Good Men).

There are several differences between civilian and military justice that provide dangerous support to the epidemic of sexual assaults in the armed forces. In today's column, let's discuss the role of the "convening authority."

Courts-martial — the official name for military criminal trials — have to be convened by a commander in a process utterly and completely foreign to civilian lawyers, let alone everyone else. If military investigators at 'Jane Doe Air Base' have evidence that a service member has committed a crime, whether they obtain that evidence through their own sting operation or when the victim reports it, they have to gather their findings and bring it to the prosecutor. But before the prosecutor can bring any charges, he needs clearance to "convene" a court-martial from the Air Base commander, a general or lieutenant-general, usually.

That same "convening authority" has the right to look at the result of the prosecution — a 20 year sentence and dishonorable discharge for aggravated sexual assault, for example — and cross off or modify whatever he doesn't like. If he thinks 20 years is a little too much, he can slash it to 10, 5, or nothing at all. If he thinks a dishonorable discharge is not warranted, he can honorably discharge the duly convicted felon or keep him in the ranks. The convening authority can even wipe the record clean.

This seems outrageous and, indeed it is. 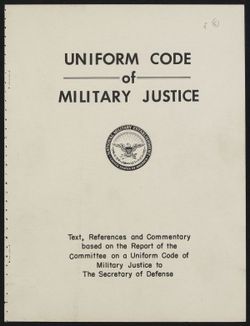 That we have a convening authority with this kind of power is a product of a history in which most military law was not conducted by military lawyers at all. For much of American history and especially before 1950, military criminal law was ad hoc. In the Revolutionary and Civil Wars, the "process" of justice for deserters and criminals was swift and localized to the unit. Before World War I, American conflicts were small enough to allow us to limp along that way, but a truly world war — with a new fighting force numbering well into the millions and the international scrutiny along with America's European involvements — made the anti-system of justice untenable. By 1950, the formalizing process finally culminated in the Uniform Code of Military Justice (UCMJ), a kind of bible for military lawyers that contained every crime, every defense, and even examples for lay persons to understand.

The UCMJ needed explanatory examples because, until recently, military criminal justice was a layman's game. Prosecutors came first, but judges, defense "attorneys", investigators, and panel members were all military officers with a week's long legal training, if that. The convening authority was an attempt to provide experienced oversight to an otherwise unprofessional system that could result in injustice.

But, military lawyers have changed while military law hasn't. Our lawyers are highly trained; our military judges are all J.D.s and former attorneys themselves. The judges who sit on the military's appellate courts are, for the most part, as well trained and intelligent as judges populating our state and federal appellate courts. (Full disclosure: I had the honor of working alongside one of those smart and qualified judges on the military's highest court, the Court of Appeals of the Armed Forces.).

With the increased professionalization of the Judge Advocate General (JAG) corps, the convening authority has not only outlived its usefulness, it also helps perpetuate the dangerous ad hoc old boys' network and undermines service member rights.

Consider for a moment the generational problem posed by convening authorities, most of whom are likely to be generals or other high-ranking officers that are more likely than their younger officers to have issues with women and out gays serving. One of the commanding officers during the Tailhook scandal told one of the victims that she should have expected to get assaulted because "that's what [a woman] get[s] for walking down the hall with a bunch of drunk naval aviators." That offensive sentiment, if in the hands of a convening authority, could result in either the refusal to authorize a court-martial in the first place or erasing any sentence after the fact. Remarkably, although that would violate our sense of justice, it would not break any military law.

The mere notion of a convening authority is offensive to due process. He is not only an untrained eye standing in judgment of a judicial process, he is the defendant's commanding officer! He has a relationship with the defendant and whether that relationship is friendly or hostile, he remains an interested party. He may object to his billiard buddy getting punished for getting too aggressive with a women. Or, he may want to manipulate the justice system to sideline a rival for a promotion. Whatever his motives, even if they are well-meaning, he is a biased participant in a justice system that requires detached objectivity.

We must eliminate the role of the "convening authority." I encourage you to call or write to Senator Gillibrand, one of our community's greatest allies, and urge her to move on this reform.

In my next column, I will discuss how the UCMJ itself contributes to the problem of male-on-male and male-on-female sexual assaults in the military. Stay tuned.