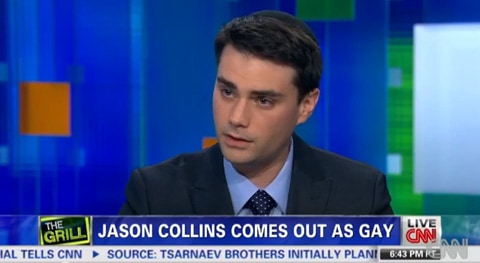 Earlier this week, Breitbart editor Ben Shapiro tweeted "So Jason Collins is a hero because he's gay? Out standard for heroism has dropped quite a bit since Normandy."

Piers Morgan asked him about the remarks on his show last night, and Shapiro replied:

"Let me ask you something. Why do you hate America so much that you think this is such a homophobic country that when Jason Collins comes out it is the biggest deal in the history of humanity? President Obama has to personally call him to congratulate him."

Answers Morgan: "I think you might be homophobic simply because you said, why is Jason Collins a hero because he's gay? Why sneer at a guy for coming out when he's being courageous?"

Says Shapiro: "I'm Jewish. I wear a yarmulke on TV. There's a lot of anti-semitism…Being who you are in 2013 in America is what America is about. It is not heroic to be who you are publicly. I'm glad for Jason Collins if he feels that he's going to live a happier life now. But it does not make you a hero to be who you are."

Previous Post: « Minnesota Marriage Equality Vote Could Come as Early As Next Week
Next Post: Oprah Sits Down with Jason Collins and His Family: VIDEOS »