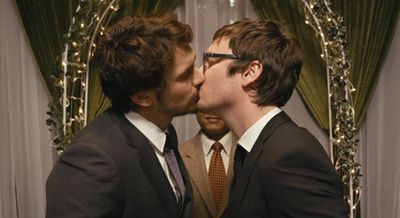 James Franco stopped by Zach Galifianakis' Between Two Ferns in what turned out to be an excuse for a gay love themed "Lonely Island" digital short. Also Zach got in some pretty good shots at Franco. The Butler, the newest film from Oscar-nominated director Lee Daniels, has its first trailer and it features a plethora of stars that are both exciting and head scratching.

Last night Anderson Cooper scored an exclusive interview with the Cleveland man who is being credited for saving three women who had been missing for 10 years. David Bowie's new video for "The Next Day" should upset some Catholics and proves that Marion Cotillard can still be sexy even with stigmata wounds. Also rapper Lil Wayne is pleased with all the support that has been shown for Jason Collins' coming out.

On the flip side right-wing moron "Coach Dave", who looks as dumb as he sounds, is upset that Obama phoned up that sodomite Jason Collins. A Pennsylvania lawmaker who is looking to push through an anti-gay marriage bill is finding that his supporters are leaping overboard. Anti-gay insanity continues to pour out of France where a cartoon depicts the main sponsor of the country's gay marriage bill as some kind of giant rabid gorilla. And apparently cheating on your wife and then breaking into her house isn't enough to stop South Carolinians from voting for Mark Sanford.

Even though his Denver Nuggets have already been bounced out of the playoffs Kenneth Faried and his two moms are the focus of a pretty awesome piece by ESPN. DOMA Project has put together a clip to remind those who are against LGBT-friendly immigration reform just who they are hurting. Over ninety religious leaders in the state of New Mexico have come out in support of a marriage equality bill and it seems that Minnesota is speeding toward marriage equality with a chance that same-sex marriage could be legalized by next week.

If you're boating near Mexico look out for very boat-chasing killer whales. Also apparently people are excited about being able to ride in a giant gay sheep at Burning Man?