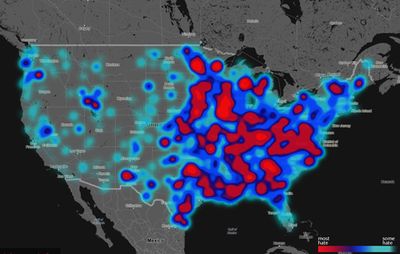 PHOTO OF THE DAY: It seems that hateful tweets come from pretty much where you would expect.

The victories continue for marriage equality as today Minnesota officially became the 12th state in the nation to legalize same-sex marriage with a 37-30 vote in the state Senate. One, if not all of the bridges in St. Paul will certainly be a "freedom to marry" bridge tonight and Michele Bachmann will have to eat her words, or her tweets at least.

Bachmann made some non-gay rights related news this past week when she had a speaking in tongues moment at the U.S. Capitol and blamed 9/11 and Benghazi on God's wrath. Speaking of Benghazi, President Obama has had enough of the "side show" the GOP is trying to stir up over last year's attacks. Also Brian Brown of NOM is trying to use a George Takei PSA to prove that folks like him are being portrayed as "sick, bigoted, ignorant, drunken and hypocritical." Nobody ever said anything about being drunk.

In this week's New York Magazine cover story, Michael Douglas talks about his upcoming Liberace biopic and tells readers to expect a lot of sex between him and co-star Matt

Damon. And after years of hoping and praying, the first trailer for the new season of Arrested Development is finally here.