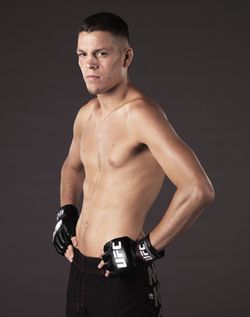 Diaz dropped the offensive remark in a Twitter message in which he took up for fellow fighter Pat Healy, who earlier this week was stripped of his win and $130,000 in bonus money for testing positive for marijuana at UFC 159 last month in Newark, N.J. That fight against Jim Miller will go down as a no contest…

…Mike Kogan, Diaz’s manager, told FOXSports.com that his client’s tweet wasn’t homophobic and was meant purely as an attack on Bryan Caraway, a fighter on the UFC 159 card who was awarded Healy’s Submission of the Night bonus worth $65,000. Diaz apparently took issue with Caraway’s lobbying on Twitter.

“Apologizing for what?” Kogan answered when asked if Diaz regretted the tweet. “He didn’t use that word in that sort of (homophobic) context. It’s a misunderstanding. If people are uneducated, that’s not my (expletive) fault. It’s slang for being a little bitch. The guy goes on Twitter and chases (UFC president) Dana (White) down like a little f** instead of picking up the phone.”