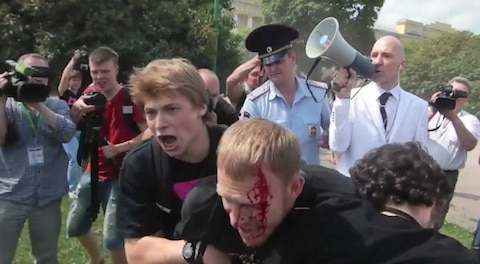 Dozens were arrested at a gay rights rally in St. Petersburg, Russia today.

Check out a stunning video of the clash, AFTER THE JUMP…

Officials in St. Petersburg deemed that the rally, which took place in a space designated for public demonstrations, violated the law. The statute essentially prohibits public displays of homosexuality, as well as talking about it to children.

About 200 nationalists also gathered at the rally, chanting slogans such as "Sodomy will not pass," and throwing eggs and rocks at the gay-rights activists, who numbered about 40.

The Field of Mars is the city’s “Hyde Park” where demonstrations are allowed without special sanctions.

Check out a stunning video of the clash, AFTER THE JUMP…