Louisiana Governor Bobby Jindal rips the current state of the Republican party in a new piece in Politico, and says it better be ready for this: 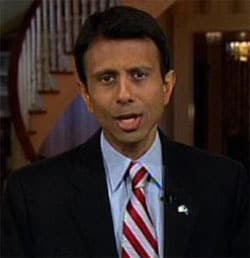 "At some point, the American public is going to revolt against the nanny state and the leftward march of this president. I don’t know when the tipping point will come, but I believe it will come soon. Why? Because the left wants: The government to explode; to pay everyone; to hire everyone; they believe that money grows on trees; the earth is flat; the industrial age, factory-style government is a cool new thing; debts don’t have to be repaid; people of faith are ignorant and uneducated; unborn babies don’t matter; pornography is fine; traditional marriage is discriminatory; 32 oz. sodas are evil; red meat should be rationed; rich people are evil unless they are from Hollywood or are liberal Democrats; the Israelis are unreasonable; trans-fat must be stopped; kids trapped in failing schools should be patient; wild weather is a new thing; moral standards are passé; government run health care is high quality; the IRS should violate our constitutional rights; reporters should be spied on; Benghazi was handled well; the Second Amendment is outdated; and the First one has some problems too. Their philosophy does not work and it got our nation into the mess it’s in."