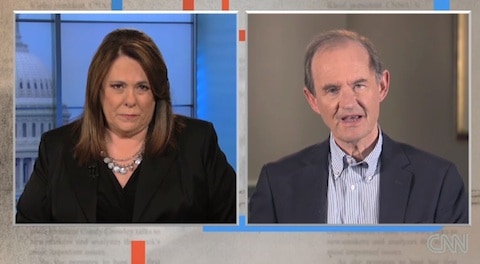 Proposition 8 attorney David Boies appeared on CNN's State of the Nation with Candy Crowley this morning to discuss the Supreme Court's rulings and the push for marriage equality nationwide.

“First, remember that that the United States Supreme Court found that the plaintiffs in this particular case had standing to attack Proposition 8, but the people who were supporting Proposition 8 did not have standing to appeal our victory in the trial court,. So that reinstates the trial court's decision that says that all bans on gay and lesbian marriage violate the equal protection and due process clauses of the 14th Amendment.”

Crowley asked Boies if it's not now a states rights issue:

“If they were allowing the states to decide for themselves, they would have allowed California to decide for itself. California passed Proposition 8. So, what the Court was doing was it was invalidating California’s choice, and that’s exactly what the courts are supposed to do under the 14th Amendment. The 14th Amendment was passed for the specific reason of saying states have rights but one of those rights is not to discriminate against its own citizens.”

Boies goes on to say that this argument will be applied in fighting same-sex marriage bans in each state.