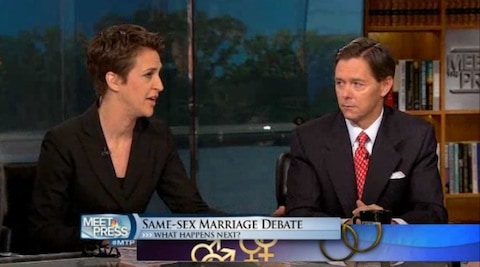 What I'd say, David, is he is denying dignity to the millions of Americans who, for moral or religious reasons, believe that gay marriage is wrong. As you just said, you've got 37 states where the people have decided that they want to protect the marriage between a man and a woman because they know that that's the environment where children can thrive and succeed. I mean, that's been proven. So it's not about the desires of adults, it's really about the best environment for children. We're talking all about politics, but the reason governments at the state level and the federal level have recognized marriage between a man and a woman is because it's better for our country and it's better for children.

Justice Kennedy addressed that issue specifically in his ruling. He says that by denying marriage rights to same-sex couples who have kids, you’re humiliating and demeaning those kids. By denying their families equal protection under the law by the parents who are raising them and who love them and who make their family. So we can put it in the interests of children, but I think that cuts both ways. And the ruling cuts against that argument. I mean, gay people exist. There’s nothing we can do in public policy can do to make more of us exist or less of us exist. And you guys for a generation have argued that public policy ought to demean gay people as a way of expressing disapproval of the fact that we exist. But you don’t make any less of us exist, you are just arguing for more discrimination. And more discrimination doesn’t make straight people’s lives any better.

David, I really can't let that go. I mean, this suggestion that because somebody wants to affirm the institution of marriage that they're ipso facto intolerant? By that argument, Barack Obama was intolerant 14 months ago. By that argument, 342 members of the House, 85 members of the Senate (including, by the way, Joe Biden, Harry Reid, Pat Leahy) who all voted for this law, and Bill Clinton who signed it into law, were intolerant and motivated by an animus and a hatred for gays.