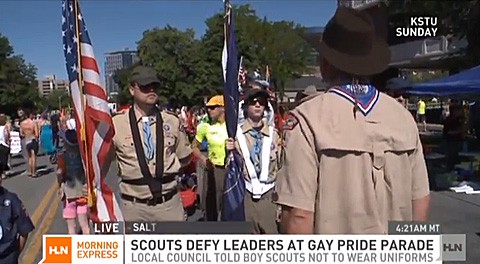 Two Boy Scout leaders have been chastised by officials from the organization and told to sign an apology letter for marching with several uniformed Scouts in the Utah Pride Parade in Salt Lake City two weeks ago. The two leaders, Peter Brownstein and Neil Whitaker marched in the June 2 parade to celebrate the organization's historic vote last month to allow gay youths. Officials with the Boy Scouts of America's Great Salt Lake Council, however, say Brownstein and Whitaker violated the organization's policy prohibiting the use of Scouting to promote a "political agenda."

The two men were told to sign a letter of apology for "violation of BSA policies and disobedience," but have refused, saying they were not advancing a "political" agenda but celebrating a "cultural" event.

"We weren't rallying for a politician or political event," Whitaker said. "To me, it was being supportive of my fellow human beings."

Current BSA policy states "no person, youth, or adult may use Scouting to promote sexual orientation or any other political or social agenda." Scouts and Scout leaders are permitted to participate in pride parades as supportive citizens but not as uniformed members of the BSA.

Watch a news report of the story, AFTER THE JUMP…