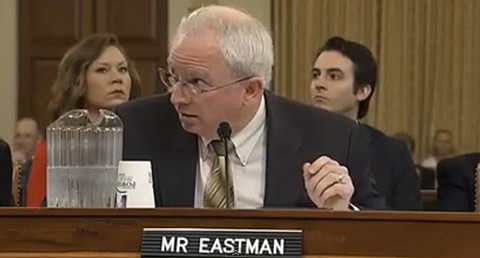 Testifying before the GOP-led House Ways and Means Committee today over the IRS Tea Party 'scandal', NOM Chair John Eastman said "traditional marriage" supporters were "harassed, assaulted on the streets, vandalized on their property" during the Prop. 8 campaign to the point where they were fearful of giving money to the organization.

Eastman also received a round of applause from the room after accusing Rep. Earl Blumenauer of "scurrilous" remarks for saying that the groups before the committee were political and shouldn't be called 'social welfare' organizations.

UPDATE: Blumenauer responds to this nonsense in the HuffPost.

Let's get real and stop the charade about what a 'social welfare' organization is.

Last year, internal National Organization for Marriage (NOM) strategy documents were leaked, stating that the organization seeks "to drive a wedge between gays and blacks" by promoting "African American spokespeople for marriage," thus provoking same-sex marriage supporters into "denouncing these spokesmen and women as bigots," and "to interrupt the assimilation" of Latinos into "dominant Anglo culture" by making the stance against same-sex marriage "a key badge of Latino identity."

Does this sound like social welfare to you? Social welfare organizations should work in the public interest — not to divide, exploit, and conquer.