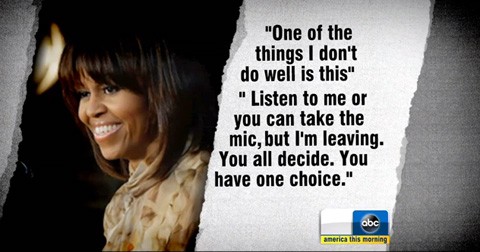 Michelle Obama was speaking at a fundraiser in Northwest Washington when Ellen Sturtz, an activist from the LGBT group GetEQUAL interrupted her speech, demanding that President Obama sign an executive order barring workplace discrimination.

Obama showed her displeasure – pausing to confront Sturtz eye to eye, according to witnesses.
“One of the things that I don’t do well is this,” she said to applause from most of the guests, according to a White House transcript. “Do you understand?”

A pool report from a reporter in the room said Obama “left the lectern and moved over to the protester.” The pool report quoted Obama as saying: “Listen to me or you can take the mic, but I’m leaving. You all decide. You have one choice.”

Obama’s suggestion that she would leave was not included in the official White House transcript.

Sturtz told the WaPo that she was "taken aback" at Obama's response to the heckling: “She came right down in my face."

Added Sturtz: “I said I want your husband to sign the executive orde. Her husband could sign this order tonight and protect 22 percent of the work force in this country.”

Sturtz was reportedly escorted from the fundraiser after the crowd asked Obama to stay.

No cameras were reportedly allowed at the event. At least no video has shown up yet.

Watch ABC News' report on the incident, AFTER THE JUMP…

UPDATE: Chris Johnson at the Washington Blade spoke at lenth with Sturtz following the incident.

UPDATE: The GetEQUAL organizers involved in the demonstration have issued the following statement.

"LGBT people in North Carolina, New Mexico, Ohio and all over the country are dehumanized in our jobs, and we are forced into the closet in order to participate in the American dream. We value the First Lady's leadership and invite her to lead the charge within the Democratic Party to end employment discrimination. President Obama has an executive order sitting on his desk that can protect a quarter of the labor force in the U.S. from workplace discrimination, we will continue engaging leaders in the Administration and the Democratic Party until President Obama fulfills a promise to our community made five years ago."