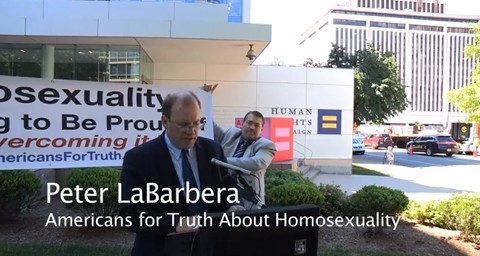 Have a laugh, AFTER THE JUMP…

Some choice quotes from LaBarbera:

"The escalation of homosexual power is bad for America….The deviant sexual revolution represented by the HRC headquarters behind us is built on a foundation of lies….You could fill a small book with the fake gay hate crimes that have been staged over the years….Most sins don't get their own Pride parade." 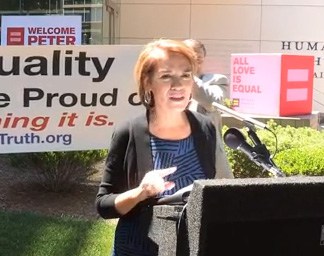 From Mission America's Linda Harvey: "And children will be led into darkness, deception, and sin… HRC wants children to embrace the stress and anxiety of gender confusion. How wicked."

From Diane Gromley, American Family Association: "What is their to be proud of when the sexual activity in which one chooses to engage leads to increased health risk and early death…Gay is definitely not okay as the human body responds to being misused during unnatural homosexual sex."

From Patrick Mangan, Citizens for Community Values of Indiana: "There are thousands of former homosexuals in our country today and it is estimated that there are more who have come out of it than are in it….This is not a civil right. What is being asked for is special rights…blah blah blah The Poison Tree."

Previous Post: « Michelle Obama Gets in Gay Heckler’s Face at DNC Fundraiser: VIDEO
Next Post: Catch Up on the Demonstrations in Turkey in 7 Minutes: VIDEO »