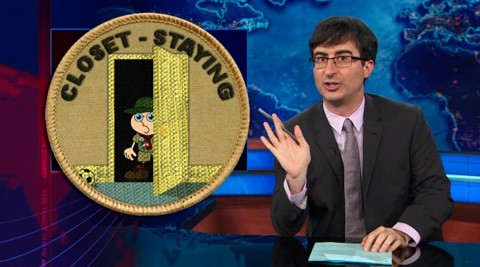 John Oliver, filling in for Jon Stewart while he's on summer hiatus, is doing a bang-up job, and last night blasted the Boy Scouts for their policy of accepting gay scouts but banning scout leaders, calling it "a tragic end for the merit badge for closet-staying.".

He added, of the policy: "They're happy to welcome anyone with homosexual thoughts up until the age when they're old enough to act on them. That must create an awkward situation at Boy Scout graduation."

Gay Scout: Oh, I'm happy to hear that. I'd like to come back as a leader one day.

Leader: You burn in hell, pervert!

In a special international edition of 'Gaywatch', Oliver also looks at Russia's ban on 'gay propaganda', Pope Francis and the Vatican's 'gay lobby', and the anti-gay marriage protests in France.

How is it that France's anti-gay protests (below) look so much gayer than our pro-gay protests? 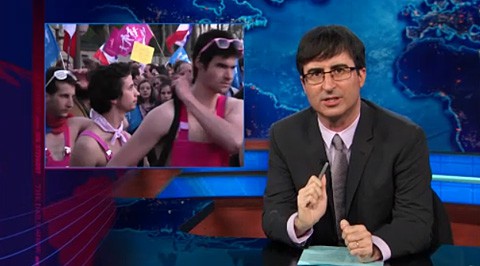