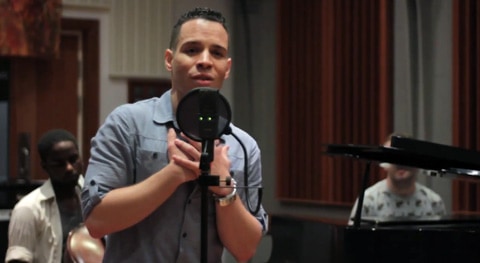 The video was recorded live at the Gibson Showroom in New York City on Thursday, June 20th, 2013. LA drag queen star Laganja Estranja and her alter ego, LA-based choreographer Jay Jackson, are the inspiration behind "Queen."

"I grew up scared of myself," says Pfeil. "After the recent amplified publicity regarding anti-LGBT violence in New York City and across the country, I woke up one morning and said, 'This is outrageous. Someone needs to say something, do something.' I have so many friends and colleagues who grew up and still are afraid of themselves. It's 2013 — that's not right."

Pfeil cites Laganja Estranja and Jackson as his inspiration and role model on how to live a life unafraid. "I wrote this song about her, and about him [Jay], and for everyone out there who is afraid. Hatred and violence didn't stop those guys sitting in the Stonewall back in 1969 from fighting back, and it sure as hell shouldn't stop any of us now. I think that's part of the mentality we have to keep in focus."

The video was produced by produced and directed by filmmaker Ben Cadwallader.