The Hollywood Reporter says the contents of secret files of private investigator Fred Otash have been shown to them and one of many revelations contained therein are tapes of Rock Hudson's wife Phyllis confronting him about his sexuality: 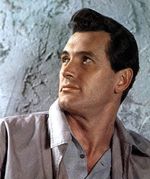 On January 21, 1958, Rock Hudson's wife confronted him, demanding to know if he was gay and grilling the actor about a Rorschach test he had taken. "You told me you saw thousands of butterflies and also snakes," she said "[A therapist] told me in my analysis that butterflies mean femininity and snakes represent that male penls. I'm not condemning you, but it seems that as long as you recognize your problem, you would want to do something about it." She also complained about "your great speed with me, sexually. Are you that fast with boys?"

Added Phyllis: "Everyone knows that you were picking up boys off the street shortly after we were married and have continued to do so, thinking that being married would cover up for you."

There's also an image of another part of the transcribed conversation here.

Hudson was the first major celebrity to die from AIDS-related causes, in 1985.

THR has much more on Lana Turner, Judy Garland, Marilyn Monroe, and Bette Davis that was uncovered in the files.