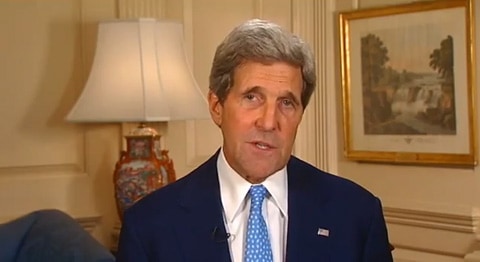 And here's a transcript of Kerry's remarks:

This month is about the assertion of equality and dignity.  It is about the affirmation of fundamental freedoms and human rights.  It is about people taking pride in who they are, no matter their sexual orientation or gender identity.  Protecting universal human rights is at the very heart of our diplomacy, and we remain committed to advancing human rights for all, including LGBT individuals.  We are committed to advancing these rights not just in the month of June, but year-round.

As Secretary, I join with my colleagues at our embassies, consulates, and USAID missions around the world in saying, no matter where you are, and no matter who you love, we stand with you.

Across the globe – in Africa, Asia, Europe, and the Americas – our diplomats are assisting local LGBT organizations and supporting local human rights advocates working to promote equality, create dialogue, and ensure protections for LGBT individuals.

Through the Global Equality Fund, the State Department has already provided critical emergency and long-term assistance to promote and protect the human rights of LGBT persons in over twenty-five countries.  And our support will continue to grow, in cooperation with other equality-minded governments, foundations and corporations.

Forty-four years after Stonewall, we see incredible progress in the fight to advance the human rights and fundamental freedoms of LGBT people, both here in the United States and globally.  Unfortunately, our work is not done.  Recent events underscore that despite progress, we still have a long way to go.  There are LGBT people of all ages, all races, and all faiths – citizens of every country on Earth.  And in too many places, LGBT people and their supporters are being attacked and harassed for simply being who they are and for standing up for their rights.

The United States condemns all such violence, harassment, and discrimination.  As President Obama said, “the struggle to end discrimination against lesbian, gay, bisexual, and transgender persons is a global challenge, and one that is central to the United States’ commitment to promoting human rights.”  LGBT persons must be free to exercise their human rights – including freedom of expression, freedom of religion, and freedom of assembly and association – without fear of reprisal.

It is my honor to reaffirm the State Department’s commitment to promoting the human rights of LGBT persons, and indeed all human beings, worldwide.

To those celebrating Pride in the United States and around the world, I wish you all a Happy Pride month.