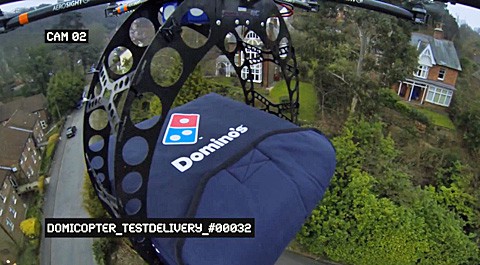 Of course, if you don't tip well, it may shoot you down.

The delivery was masterminded by a T + Biscuits, an English creative agency that was hired by Domino's to test prototypes. "We're looking at making flying pizzas a possibility," Tom Hatton, Master Brewer and founder of T + Biscuits, told NBC News.

A pizza delivering drone smells deliciously similar to the fabled TacoCopter — a taco delivery app which, to the Internet's disappointment, ended up being just a concept design — but Hatton insists the "DomiCopter" is the real deal. "We're serious about it," he said.