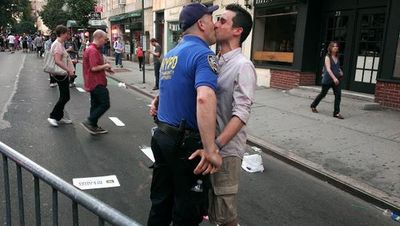 PHOTO OF THE DAY: A proposal to celebrate the death of DOMA.

A day after yesterday's historic day at the Supreme Court reactions are still being proclaimed and shock waves are still being felt. As bills to officially kill DOMA have been introduced in Congress, gay rights activists are celebrating. Rapper and very prominent gay rights activist Macklemore praised the rulings while admitting there is still a lot to be done. He is one smart man. Also now that Justice Roberts helped send Prop 8 back to California, his gay cousin is getting married.

The anti-gay activists continue to pout over yesterday's defeats, chief among them Michele Bachmann who along with other gay haters held a press conference that amounted to a lot of hot air. Chick-Fil-A's Dan Cathy is very sad about the ruling but it's nothing that a little fried food shouldn't help. And while Chris Christie believes that the Supreme Court was "inappropriate" and "wrong",  John Boehner has no plans for a new DOMA-like bill.

YouTube is celebrating Pride Month with a video dedicated to its best gay-related moments. A pro-equality Prime Minister is set to take office in Australia and as Edie Windsor puts her support behind Christine Quinn, Anthony Weiner tried to use last night's celebratory mood to gain some voters at Stonewall.

Yesterday's big news got big coverage on the night time news shows. Rachel Maddow took a comprehensive look at how the rulings will immediately effect lives. The Daily Show celebrated "Judgment Gay" and Stephen Colbert tried to wrap his head around how super gay the Constitution is now.