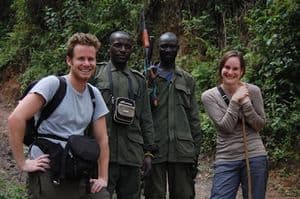 Clark Harding, writer for Out Traveler, had been planing a trip to Africa to go primate-sighting, to have his "Sigourney moment", as he called it. The only problem was that the best destination to see gorillas in the mist is in Uganda, and Harding was leaving for the country the day after the Ugandan government announced plans to pass its "Kill the Gays" bill. Undeterred, Harding went through with his trip and wrote about it on Out Traveler.

“This has got to be some kind of joke,” I said to Kristin as we drove through Kampala and in to the back country. Our jet lag was pretty killer. “All the men here hold hands.” Kristin looked out the window and sure enough: dudes were hand-in-hand, hand-in-butt-pocket, pinky-to-pinky…And while [Ugandan officials] fear gays to the point of needing to execute them, little do they realize their male constituents are acting gayer than Westerners.