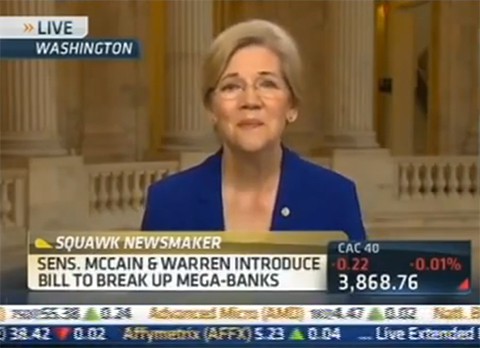 Senator Elizabeth Warren took to CNBC recently to promote the 21st Century Glass-Steagall Act, a bil which she along with Senators John McCain (R-AZ) and Angus King (I-ME) are sponsoring that would make law certain sections of the original Glass-Steagall Act that was repealed in 1999 and was widely viewed to have contributed to the economic collapse in 2008.

When asked, “shouldn’t we just tell the American consumer that no matter what we do, there will be bank boom and bust cycles no matter what the laws and regulations, you can’t protect everything?” Warren replied, forcefully:

“No. That is just wrong. Look at the history. From 1797 to 1933 the American banking system crashed about every 15 years. In 1933 we put good reforms in place for which Glass-Steagall was the centerpiece. And from 1933 to the early 1980s, that’s a fifty year period, we didn’t have any of that. None. We kept the system steady and secure. And it was only as we started deregulating, you start hitting the S&L crisis, and what did we do? We deregulated some more. And then you have long term capital management in the 90s and what did we do as a country? This country continues to deregulate more. And then we had the big crash in 2008.  You are not going to defend the proposition that regulation can never work. It did work.”

After one commentator suggested that Warren’s attempt to re-introduce Glass-Steagall has a slim chance of passing and that she should focus on “doing things that actually have a chance of happening and becoming law,” Warren responded:

“I remember going on television multiple times including here when I talked about the Consumer Financial Protection Bureau, when the big banks were spending more than a million dollars a day lobbying against it and when everybody told me you’ll never get that thing through, why are you even trying, the chances of passing it are slim to none, and yet look around, we now have a good, strong Consumer Financial Protection Bureau. It’s recovered a half a billion dollars for families who got cheated. It’s out there working on behalf of military families, on behalf of seniors, on behalf of students. We got that agency because we got out and fought for it. I actually believe in that.”