The House GOP faces a decision on Thursday and must answer whether it will continue to defend laws limiting veterans benefits to heterosexual married couples, Buzzfeed reports: 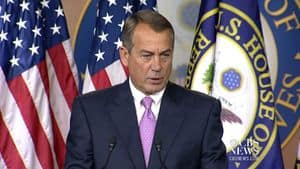 “We’re reviewing the impact of the Supreme Court’s decision, and don’t have any announcement to make at this time,” House Speaker John Boehner’s spokesman, Michael Steel, told BuzzFeed on Wednesday when asked if the defense of the veterans’ statutes would continue.

The day after the Supreme Court ruled in Edie Windsor’s challenge to section 3 of DOMA that the federal definition of marriage that excluded gay couples in DOMA is unconstitutional, Judge Richard Stearns asked the parties in another lawsuit, filed in federal court in Massachusetts and addressing the rights of service members and veterans and their spouses, to give “any reasons why judgment should not enter for plaintiffs in this case.”

The plaintiffs in the Massachusetts case, filed by Servicemembers Legal Defense Network and Chadbourne & Park, argued in a Wednesday filing in the case that the decision in Windsor’s case controls the outcome in their case and that Stearns should decide in their favor.