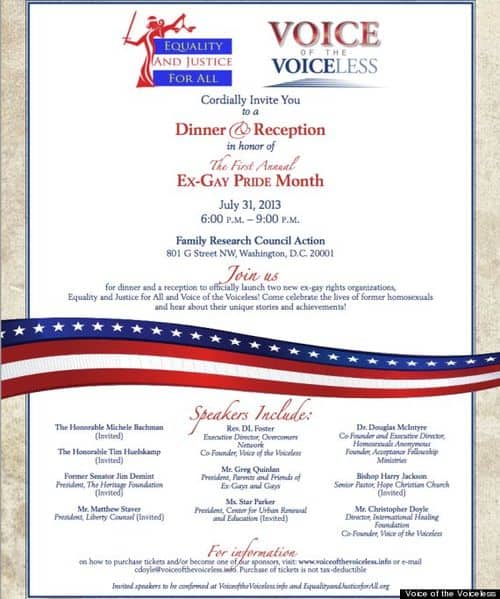 Hate group Family Research Council is planning a dinner and reception to announce two new 'ex-gay' rights organizations and a line-up of familiar anti-gay wingnuts has been invited to speak, the HuffPost reports:

The event is scheduled for the end of July, just weeks after the Supreme Court's landmark rulings in favor of gay rights. Rep. Michele Bachmann (R-Minn.) has been extended an invitation as an honorable attendee.

The Family Research Council's legislative affiliate, FRC Action, will officially launch two new ex-gay rights organizations, Voice of the Voiceless and Equality and Justice For All, during the dinner in Washington, D.C., on July 31.

"Come celebrate the lives of former homosexuals and hear about their unique stories and achievements!" reads the invitation.

In addition to Bachman, the Heritage Foundation's Jim DeMint, the Liberty Counsel's Matthew Staver and Rep. Tim Huelskamp (R-Kan.) — who on Friday introduced a constitutional amendment banning same-sex marriage — have all been invited to speak.