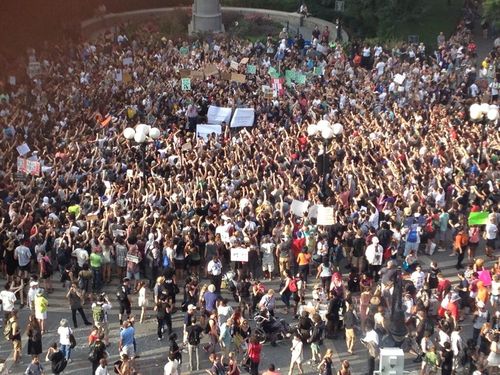 Thousands gathered in New York City's Union Square and Times Square over the weekend to protest the shocking acquittal of George Zimmerman in the Trayvon Martin case. 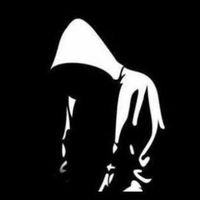 The Justice Department is beginning to reexamine the case now that the criminal trial (though not its repercussions) is now over, the NYT reports:

The federal inquiry, which was started shortly after the shooting last year but had been delayed while the state criminal trial in Florida was under way, was being restarted after civil rights leaders called on the Justice Department to re-examine the case. The leaders said Sunday that they remained convinced that the shooting had a racial element. Mr. Martin, 17, was black.

“There is a pattern of George Zimmerman making dozens of calls to 911 over several years, frequently about young men of color,” Benjamin T. Jealous, the president of the N.A.A.C.P., said in an interview on Sunday. Mr. Zimmerman and his family have defended the shooting as an act of self-defense.

In a statement on Sunday, the Justice Department said that now that the state criminal trial was over, it would continue its examination of the circumstances in the shooting.

President Obama released a statement over the weekend urging calm after the verdict:

The death of Trayvon Martin was a tragedy.  Not just for his family, or for any one community, but for America.  I know this case has elicited strong passions.  And in the wake of the verdict, I know those passions may be running even higher.  But we are a nation of laws, and a jury has spoken.  I now ask every American to respect the call for calm reflection from two parents who lost their young son.  And as we do, we should ask ourselves if we’re doing all we can to widen the circle of compassion and understanding in our own communities.  We should ask ourselves if we’re doing all we can to stem the tide of gun violence that claims too many lives across this country on a daily basis.  We should ask ourselves, as individuals and as a society, how we can prevent future tragedies like this.  As citizens, that’s a job for all of us.  That’s the way to honor Trayvon Martin.

The protest in Times Square: