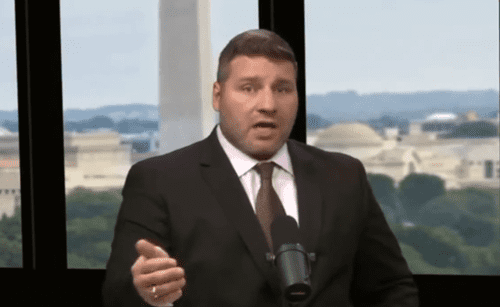 Shortly before the Supreme Court handed down their landmark rulings in support of marriage equality, Matt Barber, along with hundreds of other anti-gay activists, pledged to stand firm in his opposition to LGBT rights, regardless of what the court decided. Now, some weeks and two historic victories later, Barber is remaining firm in his conviction, and is prepared to accept any persecution or penalties that may occur.

The statement took place on the "Faith and Freedom" radio program that was broadcast yesterday, July 8. In it, he blamed the Supreme Court for "open[ing] the floodgates for persecution to occur," for those who refuse to "pretend that a man can marry a man or a woman can marry a women under any circumstances, in any context whatsoever." In his statement, Barber also makes use of the popular "render onto Caesar that which is Caesar's" quote, which, in its original context, refers to the question of taxes, and has nothing to do with same-sex marriage.

Watch the video, courtesy of Right Wing Watch…AFTER THE JUMP…