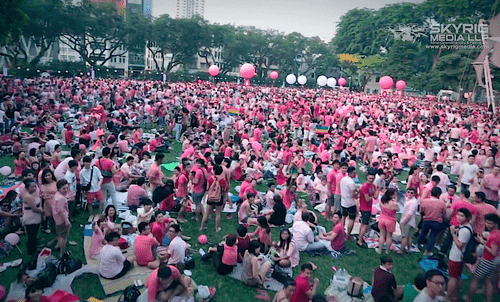 For one day in June, the tiny city-state of Singapore brims with bright pink clothing, banners, and festivities to mark the annual "Pink Dot" gathering, a celebration in support of inclusiveness, diversity and the freedom to love. This year's celebration, the fifth such event, was the biggest so far; at 21,000 people it was the largest civil-society gathering in Singapore history.

But for all Pink Dot's success, the Singapore government's official ambivalence regarding gay rights reflects a common hesitation among Southeast Asian countries when faced with this new notion of human sexuality. Like our own 50 state variety of attitudes towards LGBT rights, some Southeast Asian countries are beginning to take their first hesitant steps towards equality, while others seem to be reinforcing their disapproval of homosexuality.

Continue, AFTER THE JUMP…

The two countries in the vanguard of liberalisation are Thailand and (more surprisingly) Vietnam, both largely Buddhist. Thailand has long been known for its sexual freedoms, decriminalising homosexuality in 1956. Now a bill is being debated to overturn the ban on gay marriage. It would be the first country in Asia to do so.

Vietnam is notorious for squashing individual rights. When it comes to homosexuality, however, the ruling Communist Party is much more relaxed. Le Quang Binh, a prominent gay activist, says that the gay-rights movement has been the country's most successful organised social movement in the past few years. The justice ministry is now proposing a modification to the law on marriage and family that would overturn a ban on same-sex marriage.

And while this year's Pink Dot boasted multinational sponsors such as Google and was tacitly endorsed by the government, Singapore continues to struggle with the issue of LGBT rights. The government continues to keep one of the most draconian (albeit unenforced) laws against homosexuality on the statute books. Section 377A of the penal code criminalizes sexual acts between men, in private or public.

Pushing back against frequent calls to repeal Section 377A are Singapore's growing evangelical mega-churches, many of which have formed an alliance to campaign against any law in favor of LGBT rights. Religion, The Economist asserts, continues to be the chief roadblock in the push for LGBT equality in South-East Asia.

Religion has also long dictated attitudes towards gay and lesbian rights in neighbouring Malaysia, which has a Muslim majority and outlaws homosexuality. The signs are that, if anything, the country is becoming less tolerant. Last year the education ministry published guidelines for helping parents spot any "symptoms" of homosexuality in their children. These included, for boys, wearing V-neck and sleeveless shirts, as well as "hanging out" with "big handbags, similar to those used by women."

Indonesia, which has the world's biggest Muslim population, also shows marks of growing intolerance. The country has a secular constitution, and homosexuality is legal in every province bar Aceh. Yet a recent poll by the Pew Research Center found that 93% of Indonesians surveyed felt that homosexual people "should not be accepted."

It appears that, like the US, Southeast Asia has a long road ahead before full LGBT equality is reached. It's high time to start working on both fronts.

Check out some videos of this year's Pink Dot celebration below.