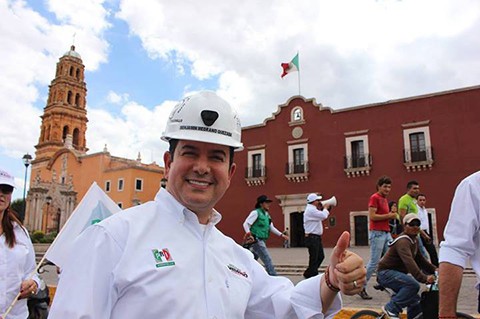 "Somewhat? Very machisto, I would say," Medrano says of his region. "I
am going to be mayor of a township (roughly equivalent to a U.S. county)
where there are 258 villages full of tough country people, who don't
necessarily have much information on what's happening elsewhere, and
have even less of an automatic sympathy with their gay mayor."

Gay rights groups in Mexico heralded Medrano's win as an important step forward for the country. Though many high ranking elected officials have been rumored to be gay, Medrano is the highest profile openly gay politician to be elected to office to date. Concerned by the turf war that has grown increasingly bloody in Zacatecas, Medrano campaigned on a public-safety platform that would increase cooperation between federal and local police while also trying to root out corrupt cops bought off by the cartels.

Though gay rights causes, including the legalization of same-sex marriage, have advanced in Mexico as of late, Medrano is not always in lockstep with other Mexican LGBT advocates and activists:

A Roman Catholic, [Medrano] says "I wish the church had a different view, but I
cannot go against doctrine … I respect my church, and I don't want to
dig any deeper beyond what's permitted and what is appropriate."

"I'm not in favor of gay marriage, I don't share that view, because we
are still very small town … in short, we're not prepared, in my view,"
he said. "Not yet, anyway, because we have strong roots in our
religion, and in our customs."

But he criticizes gay politicians who refuse to come out, saying he's
"very proud to be the first openly gay mayor in this country."

Some speculate that Medrano's more conservative stance on gay rights issues along with his reputation as a respected singer helped him garner the favor of the people of Fresnillo.